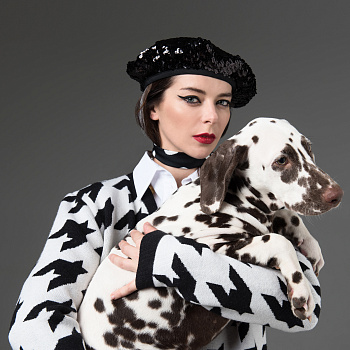 DressOne and the Walt Disney Company Russia present their collection inspired by Cruella de Vil. Cruella de Vil, one of the main characters of Disney's animated film “101 Dalmatians”, is often named a true style icon. She has been a muse for many famous designers worldwide – they drew inspiration from her looks when creating their collections. It is not surprising that DressOne (online boutique store with exclusive items by Russian designers) and the Disney branch in Russia decided to make this unsurpassed fashionista the focus of their new collaboration. The DressOne multi-brand invited several young Russian designers - A.YA, ARUT Moscow, MIRSTORES, Roseville - to take part in the joint project with Disney and to present their vision of Cruella de Vil’s style. Each of the designers saw it in their own way and the unique products of their creativity turned into the wardrobe items designed specifically for the project. Now, DressOne and Disney Russia are happy to present the one-of-a-kind capsule collection created by young Russian designers and inspired by Cruella de Vil. It consists of both interesting casual looks and evening wear garments (that will be just right for a New Year party), as well as of items that will make great gifts to anyone crazy about fashion (crazy not to such an extent as to rival the movie character, though). The collection consists of 14 items, including dresses, skirts, jackets, T-shirts, knitwear, a velvet kimono, a shopper bag and a baseball cap. Despite the fact that the items created for the collection were inspired by the style of Miss Extravagance herself, the young designers interpreted them in a modern way – therefore, they will easily fit into the wardrobes of both the main Disney it-girl and a living and breathing one. Actress Marina Aleksandrova was entrusted with the task to personify the modern Cruella and wear the looks made by Russian designers (A.YA, ARUT Moscow, MIRSTORES, Roseville) for a special DressOne photo shoot.